No to the dismissal of 2,500 Embraer workers!

Embraer, a Brazilian aerospace manufacturer announced the dismissal of 2,500 workers this past Thursday (3/9). The company plans to lay off 900 employees and the other 1,600 "joined" the VDP (Voluntary Dismissal Plan), which ended Wednesday (2). The dismissals were made without any negotiation with the Metalworkers Union of São José dos Campos, violating a job preservation agreement signed on April 9 (clause 8.1), precisely in a period of public calamity caused by Covid-19.

The Union put into question the VDP voluntary character as there are many complaints from workers that Embraer managers were putting pressure on those who were on paid leave to join the VDP. The Public Prosecutor for Labor is investigating these complaints.

In the past two years, Embraer's management has irresponsibly ventured into a commercial transaction with Boeing - which ended up breaking the deal in April this year. If the sale were concluded, it would primarily benefit the US company and its insatiable shareholders, to the detriment of Brazil's interests and its sovereignty. With the business undone, the company is now throwing the burden of the crisis created by management and shareholders on workers.

The union will act to reverse the layoffs. It is unacceptable to layoff workers amidst the pandemic. While maintaining senior executives on millionaire salaries, the management dismisses 2,500 fathers and mothers who depend on their jobs to survive.

The Metalworkers Union of São José dos Campos and Region, affiliated to CSP-Conlutas, held meetings on Friday and Saturday when Embraer workers approved the Union's proposal against layoffs and endorsed the strike passed by in-person mass meeting.

Name of organization repudiate this cowardly dismissal, which follows the cruel logic of defending profit in capitalist society, and demands the immediate reintegration of the 2.5 thousand workers. More than ever, São José dos Campos Metalworkers Union's campaign for the renationalization of Embraer is necessary to save jobs. It is necessary to return Embraer to the hands of the Brazilian people saving thousands of direct and indirect jobs in the aeronautical sector, as well as the country's technological capacity and sovereignty.

Repudiation of layoffs!
For the immediate reinstatement of all those dismissed!

Send the motion to the emails below: 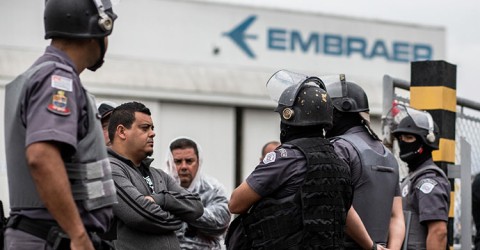